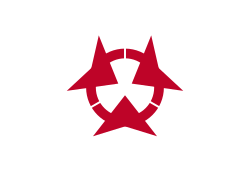 Ōita Prefecture (大分県, Ōita-ken?) is a prefecture in the Kyūshū region of Japan on the island of Kyūshū.[1] The capital city is Ōita.[2] Ōita is well known in Japan for its many hot springs.

In the 6th century, one of the regions of Kyushu was divided into Bungo Province and Buzen Province.

After the Meiji Restoration, districts from Bungo and Buzen provinces were combined to form Ōita Prefecture.[3]

Ōita Prefecture is on the north-eastern section of the island of Kyūshū.

National Parks are established in about 28% of the total land area of the prefecture.[7]

Fukiji Temple has the oldest wooden structure in Kyushu.

The Usuki Buddhas include 60+ cliff carvings from Heian period.