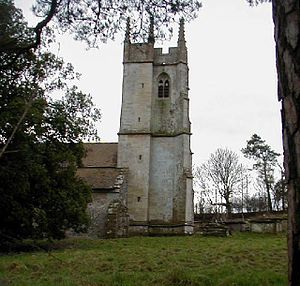 Imber is a village in Wiltshire, England, which has no people. It is on Salisbury Plain, a flat area in Southern England. The people of Imber were moved out in 1943, and rehoused elsewhere. The whole area was needed as a training ground for the military. Imber is now part of the British Army's largest training area in England.

The area around Imber has been settled since the Iron Age, before the Romans came to Britain. The first mention of the village was in Saxon times, in 967. The village is also listed in the Domesday Book. At that time, around fifty people lived there. The village has a church that was built in the 13th century. In the 14th century, about 250 people lived in the village. In 1851, the population reached its peak at about 440 people. When they left in 1943, about 150 people had to move.