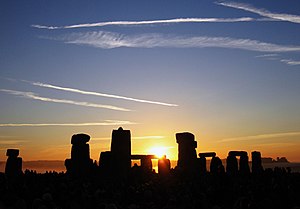 Stonehenge, the most famous antiquity on Salisbury Plain

Salisbury Plain is in the central southern England covering 300 square miles (780 km2).[1] It largely lies within the county of Wiltshire, with a little in Hampshire.

The Plain is famous for its rich archaeology, including Avebury and Stonehenge, which are a joint World Heritage Site. The Plain is sparsely populated and is the largest remaining area of calcareous grassland in north-west Europe. The Plain also has arable land, and a few small areas of beech trees and coniferous woodland.

On the Plain is the British Army's largest training ground in England. It is suitable terrain for tank manoeuvres; buildings such as Imber are used for urban warfare training.

The boundaries of Salisbury Plain have never been defined, and there is some difference of opinion as to its exact area.[2] The river valleys surrounding it, and other downs and plains beyond them loosely define its boundaries. To the north the scarp of the downs overlooks the Vale of Pewsey, and to the north west the Avon. The River Wylye runs along the south west, and the River Bourne runs to the east.[3]