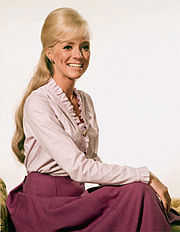 Inger Stevens (born Inger Stensland; October 18, 1934 – April 30, 1970) was a Swedish-American actress who was best known for her role as Katy in the television sitcom The Farmer's Daughter.

Stevens was born on October 18, 1934 in Stockholm, Sweden. She was raised in New York City, New York and in Manhattan, Kansas. Stevens studied at the Manhattan High School and at the Actors Studio.

Stevens was married to Anthony Soglio from 1955 until they divorced in 1958. Then she was married to Ike Jones from 1961 until her death in 1970. Stevens committed suicide after drinking barbiturate (poison). She died on her way to the hospital in Hollywood, California on April 30, 1970, aged 35.

Help Improve This Page: Please contact us to become an approved KidzSearch editor and provide your credentials. Provide feedback on this article in our Inger Stevens Forum