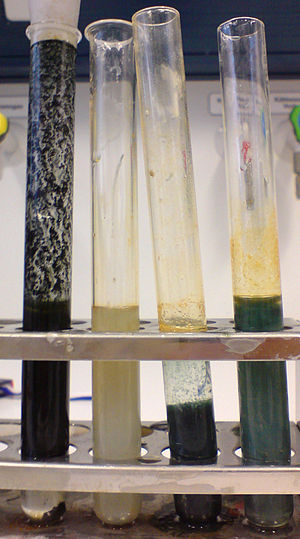 The second tube from the left has pure iron(II) hydroxide

Iron(II) hydroxide is a chemical compound. Its chemical formula is Fe(OH)2. It has iron and hydroxide ions in it. The iron is in its +2 oxidation state.

When pure, it is a white solid. It very easily turns dark green in air, which is its normal form. It then reacts with more oxygen to turn brown as iron(III) oxide is formed. It is a reducing agent.

It can be formed by electrolysis of water with a piece of iron metal as the anode (positive connector). A green slime will appear around it, and hydrogen will be released at the cathode (negative connector). It is normally made by reacting iron(II) sulfate with sodium hydroxide.

It was being investigated as a detoxifier in wetlands. Some wetlands have toxic selenite and selenate ions in them. Iron(II) hydroxide reduces them to selenium, which is much less toxic. It is also used in the nickel-iron battery.