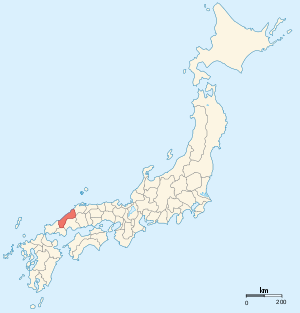 In the Edo period, silver was discovered and mined. The Script error: No such module "Nihongo". was added to the World Heritage List in 2007.[2]

In the Meiji period, the provinces of Japan were converted into prefectures. The maps of Japan and Iwami Province were reformed in the 1870s.[3]

Mononobe jinja was the chief Shinto shrine (ichinomiya) of Iwami. [4]