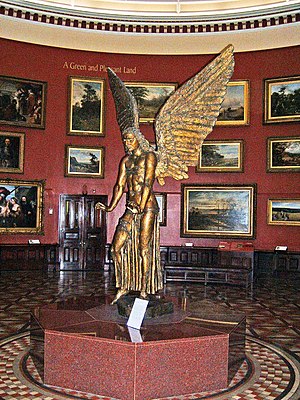 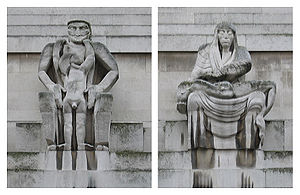 Sir Jacob Epstein KBE (10 November 1880 – 19 August 1959) was an American-born British sculptor, a pioneer of modern sculpture.[1][2][3][4] He was born in the United States, and moved to Europe in 1902, becoming a British citizen in 1911. He often produced controversial works which challenged taboos on what was appropriate subject matter. His portrait heads were traditional, but much of his other work was modernist. He also made paintings and drawings, and often exhibited his work.[5]

The sculptures Ecce Homo (Old Coventry Cathedral) and Rock Drill (1913–1914, Museum of Modern Art, New York City), are famous and important, but we have no images of them. On view in the Strand, London near Trafalgar Square, are his sculptures for Zimbabwe House. There are a number of his busts (sculptures of heads) in the National Portrait Gallery, also near Trafalgar Square.