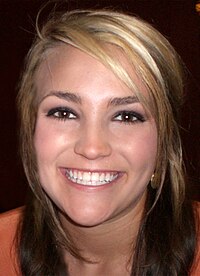 Jamie Lynn Marie Spears (born April 4, 1991 in McComb, Mississippi) is an American actress and singer. She is the younger sister of pop singer Britney Spears.[1] She played the lead role in the television series Zoey 101.[1] In late December 2007 it was revealed that Jamie Lynn was pregnant.[1] Jamie Lynn's daughter, Maddie Briann Aldridge, was born on June 19, 2008. Spears is now a country music singer. In November 2013 Spears released her first single, "How Could I Want More".