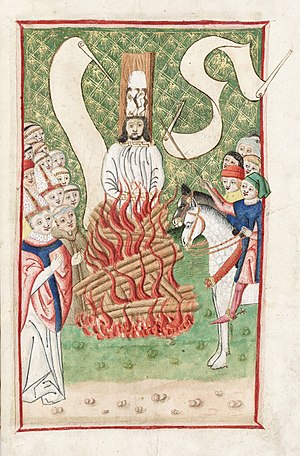 Jan Hus burned at the stake

Jan Hus (also known as John Huss)(c.1370-July 6, 1415) was born in Husinec, Bohemia (now Czech Republic). He was a Bohemian religious thinker and reformer. He started a religous movement that was strongly influenced by the beliefs of British scholar, John Wycliffe (John Wyclif).

Hus studied at the University of Prague. In about 1400, he became a Catholic priest, and was soon accepted a position of preaching in Czech, the language spoken in Bohemia (Czech Republic). While preaching, he studied Wycliffe’s writings, and came to like these writings, especially because of how authentic and real they were. In 1403, Hus asked to undo the ban upon these writings and translated them into Czech. The church, led by archbishop Zbynek Zajíc, had different beliefs. In 1410, Zajíc ordered that Hus’ writings be burned and Hus and his followers, the Hussites be forced out of the church. The Roman Catholic Church has not tolerated such heresies. Hus was excommunicated in 1411, condemned by the Council of Constance, and burned at the stake on July 6, 1415, in Konstanz (aka Constance), Germany. [1][2]

Many of his teachings were later taken up by Martin Luther who also published some of the things he wrote in prison.