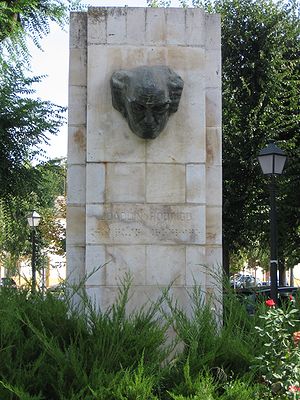 Monument to Rodrigo in Aranjuez

Joaquín Rodrigo (born Sagunto, Valencia, 22 November 1901; died Madrid, 6 July 1999) was a Spanish composer of classical music and a virtuoso pianist. Although he was blind from an early age, he became one of the most important Spanish composers of the 20th century. He wrote a lot of music for guitar, which helped classical guitar music worldwide to become more popular. His most famous work is a guitar concerto called Concierto de Aranjuez.

Rodrigo became blind at the age of three after becoming ill with diphtheria. When he was eight he began to learn piano and violin. He also learned the guitar, but never became very good at it, although he was to compose some wonderful music for the instrument.

After studying music in Valencia he went to Paris where he studied with Paul Dukas in Paris. After a short time back in Spain he returned to Paris to study musicology, first under Maurice Emmanuel and then under André Pirro. In 1925 he received Spain's National Prize for Orchestra for his pieces Cinco piezas infantiles (Five Children's Pieces). In 1947 Rodrigo became a professor of music history in Madrid, a job that was made especially for him.

Rodrigo’s most famous work, de Aranjuez, was composed in 1939 in Paris. It is a concerto for solo classical guitar and orchestra. There are three movements. The middle movement is a slow movement with a tune which is played on the cor anglais. It has become one of classical music’s best-loved tunes.

After the success of this piece several other musicians asked him to write concertos for them, e.g. the flautist James Galway, the cellist Julian Lloyd Webber and the guitarist Andrés Segovia, for whom he composed Fantasía para un gentilhombre in 1954. Another of his works is called Concierto Andaluz, for four guitars and orchestra.

In 1991, Rodrigo was raised to the nobility by King Juan Carlos; he was given the title Marqués de los Jardines de Aranjuez (Marquis of the Gardens of Aranjuez). He was given the Prince of Asturias Award in 1996, the highest honour a Spanish civilian can get. He was made Commander of the Order of Arts and Letters by the French government in 1998.

He married Victoria Kamhi, a Turkish-born pianist, in 1933. They had a daughter called Cecilia. Rodrigo died in 1999 in Madrid at the age of 97. Joaquín Rodrigo and his wife Victoria are buried at the cemetery at Aranjuez.

Rodrigo composed about 170 works. These include 11 concertos, lots of pieces for choir, songs, piano music and guitar music. Like Manuel de Falla in the early 20th century, Rodrigo became the leading figure in Spanish music in the later part of the century. His music is not like most of the music that was being written in Europe at the time. At first his music was influenced by that of Stravinsky, Ravel and Granados, but later his personality gave it a special Spanish character. He had a lot of knowledge and wrote articles about lots of different arts subjects.