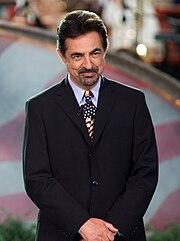 Joseph Anthony "Joe" Mantegna (born November 13, 1947) is an American movie, stage, television, voice actor, producer, writer, and director. He did the voice of Fat Tony in The Simpsons. He also played David Rossi in Criminal Minds. He also played Ian "The Shark" in Airheads. He played Grem in the Disney-Pixar animated movie Cars 2. He has won a Tony Award.

Mantegna was born in Chicago, Illinois.[1] He has been married to Arlene Vrhel since 1975 and they have two children.