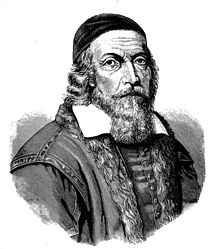 An example page in Latin

Comenius (28 March 1592 – 15 November 1670) was a 17th century Czech bishop, and an innovator in education.[1] His name is spelt differently in almost every language.[2] In English it is John Amos Comenius, but he is usually called just 'Comenius'.

Comenius is famous for arguing for universal literacy, and inventing the idea of a modern textbook which used pictures as well as prose to get its message across.[1][3][4] Comenius also tried to design a language in which false statements could not be written.[5]

Some books by Comenius

There are about 16 works, with many translations and versions.[3]