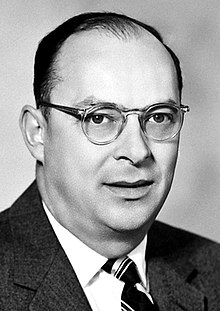 John Bardeen (23 May 1908 – 30 January 1991) was an American physicist and electrical engineer. He is the only person to win two Nobel Prizes in Physics.

Bardeen worked with William Shockley and Walter Brattain to invent the transistor on 23 December 1947. They shared the Nobel Prize in Physics for 1956.

Later, Bardeen worked with Leon Cooper and John Robert Schrieffer. They created the BCS theory of superconductivity, named after them. For this work they shared the Nobel Prize in Physics for 1972.

Bardeen was a Professor of Electrical Engineering and Physics at the University of Illinois at Urbana-Champaign from 1951 to 1991.