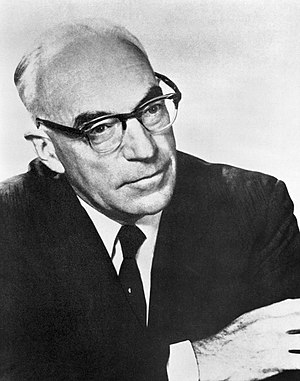 Sir John Carew Eccles AC (27 January 1903 – 2 May 1997) was an Australian neurophysiologist and philosopher. He was awarded the 1963 Nobel Prize in Physiology or Medicine for his work on the synapse. He shared the Nobel Prize with Andrew Huxley and Alan Lloyd Hodgkin. Before this, he was became a Knight Bachelor in 1958. He was named the Australian of the Year in 1963.[1] After the Second World War, he became a professor at the University of Otago in Dunedin, New Zealand. From 1952 to 1962, he worked as a professor at the John Curtin School of Medical Research (JCSMR) of the Australian National University in Canberra.

Eccles was born in Melbourne, Victoria. He was married to Irene Frances Miller from 1928 until their divorce in 1968. The couple had nine children. Eccles later married Helena Táboríková of Prague.