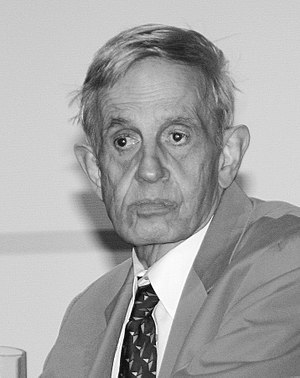 John Forbes Nash Jr. (June 13, 1928 – May 23, 2015) was an American mathematician who worked in game theory and differential geometry.[1][2] He was born in Bluefield, West Virginia. He shared the 1994 Memorial Prize in Economics with two other game theorists, Reinhard Selten and John Harsanyi.

Nash was born on June 13, 1928, in Bluefield, West Virginia. He studied at Princeton University and at Carnegie Institute of Technology.

The winner of a Westinghouse scholarship, he attended the Carnegie Institute of Technology, where he received both his bachelor's degree and his master's degree in 1948. From Pittsburgh he went to Princeton University where he worked on his equilibrium theory. He received a Ph.D. in 1950 with a dissertation on non-cooperative games. The thesis, which was written under the supervision of Albert W. Tucker, contained the definition and properties of what would later be called the Nash equilibrium. His studies on this subject led to three articles:

Nash also did important work in the area of manifolds (complex spatial structures):

This work led to Nash embedding theorem: "Two real algebraic manifolds are equivalent if and only if they are analytically homeomorphic." [1]

He is best known in popular culture as the subject of the Hollywood movie, A Beautiful Mind, about his mathematical genius and his struggles with schizophrenia, with which he was diagnosed.[3]

Nash married Alicia Lopez-Harrison de Lardé in 1957. They had one son. Nash had a first son out of wedlock to Elenor Stier.. In 1963, the couple divorced. They later remarried in 2001. Nash lived in West Windsor Township, New Jersey for a long time.[4]

On May 23, 2015, Nash and his wife Alicia were killed in a car accident near Monroe Township, New Jersey.[5] A taxi that they were riding in was struck by another vehicle and the pair was ejected from the taxi.[6] Nash was 86 years old.