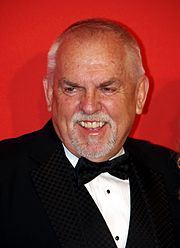 He is best known for his role as Cliff Clavin in Cheers and for his role in all of the Pixar animated movies which includes; Hamm in Toy Story, Toy Story 2, and in Toy Story 3, P.T. Flea in A Bug's Life, The Abominable Snowman in Monsters, Inc., the school of Moonfish in Finding Nemo, The Underminer in The Incredibles, Mack the Truck in Cars, and in Cars 2, Mustafa the waiter in Ratatouille, John in WALL-E, Tom the construction worker in Up, Gordon the Guard in Brave, The Abominable Snowman in Monsters University.