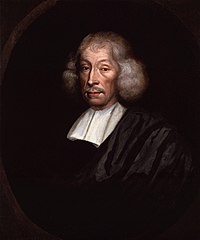 Ray was a Protestant dissenter who had accepted the return of Charles II. He was ordained[2] in London in 1660, but refused to sign the Act of Uniformity of 1662. The Act of Uniformity made the Book of Common Prayer compulsory in religious services, which was opposed by those of Puritan beliefs. So Ray was forced to resign his Fellowship of Trinity College, Cambridge; he returned to his native village of Black Notley, near Braintree in Essex. After this, his most important scientific works were supported financially by the Royal Society, whose President at a critical time in the 1680s was Samuel Pepys.

Ray published important works on plants, animals, and natural theology. His classification of plants in his Historia Plantarum, was an important step towards modern taxonomy. Ray rejected the system by which species were classified according to an either/or type system. Instead he classified plants by observation according to similarities and differences. Thus he advanced scientific empiricism against the deductive rationalism of the scholastics. He was the first person to give a biological definition of the term species.[3]

"Ray sweeps away the litter of mythology and fable... and always insists upon accuracy of observation and description and the testing of every new discovery".[4]p10

Ray published about 23 works, depending on how one counts them. The biological works were usually in Latin, the rest in English. For ease of reading, the titles below are in English.[5]

Including the various editions, there are 172 works of Ray, of which most are rare. The only libraries with substantial holdings are all in England.[5]p153 The list in order of holdings is: