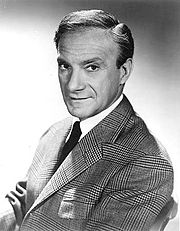 Jonathan Harris (Jonathan Charasuchin; November 6, 1914 – November 3, 2002) was an American movie, television, radio, stage, and voice actor who is known for his role as Dr. Zachary Smith in Lost in Space.

Harris was born on November 6, 1914 in The Bronx, New York City, New York. He studied at James Monroe High School. Harris was married to Gertrude Bregman from 1938 until his death in 2002. Harris died on November 3, 2002 in Encino, Los Angeles, California from heart failure, aged 87.[1]