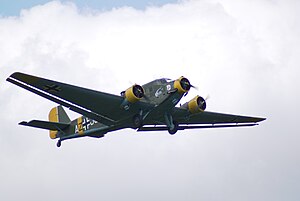 The Junkers Ju 52 is a civilian and military German aircraft. It was designed and built during in Nazi Germany as airliner and transport aircraft. The Luftwaffe used this plane widely during World War II. After the war, it was built in France as AAC-1 Toucan and in Spain as Casa 352. The Armée de l'Air used it in the Algeria War to transport French troops, like the Légion Étrangère.

Lufhtansa was its main airline. More than 4800 were built.