Justin Drew Bieber, (born March 1, 1994 in Stratford, Ontario, Canada) is a Canadian pop singer and actor. He was discovered by his manager Scooter Braun from his YouTube videos in 2008.[4]

Justin Bieber grew up in Ontario. When he was twelve years old, he went into a local singing contest. He came in third place. The video of the contest was uploaded to his YouTube channel[5] run by his mother Pattie Mallette. Bieber was noticed by famous music industry manager Scott Samuel "Scooter" Braun.[6]

Braun saw the 12-year-old boy on YouTube singing a song by Ne-Yo. Braun contacted Bieber's mother, Mallette, who agreed to bring her son, who was 14-year-old at that time, to Atlanta to try working together. Braun convinced them to move from Canada to the United States.

In 2009, Bieber toured with Iyaz and Taylor Swift, and traveled in the United States. His first album, My World, which was released in that year, features four singles, "One Time", "One Less Lonely Girl", "Favorite Girl", and "Love Me". He signed to a record deal with Usher. He released My World 2.0 in March 2010 as his second album,[9] as well as going on a world tour. The album includes his smash hit single "Baby" featuring Ludacris, a remix version of "Somebody to Love" featuring his mentor Usher, and two promotional singles "U Smile", and "Never Let You Go". In the same year, he released My Worlds Acoustic, which includes acoustic versions of his songs from the My World album and it also contains the ballad song "Pray". Purpose's single "Sorry" is his most popular song.

In late 2011, he made his professional acting debut in the biopic 3D concert film Justin Bieber: Never Say Never, the movie is accompanied with the release of his remix album Justin Bieber: Never Say Never - The Remixes, which includes remix versions of songs from his previous albums, collaborations with other recording artists and a brand-new track is also included. The remix album includes the single "Never Say Never" a duet song with singer and actor Jaden Smith in which it serves as the theme song for the 2010 movie The Karate Kid. That same year, he released his first Christmas-themed album and his second studio album, Under the Mistletoe, it features the singles "Mistletoe", Fa La La" featuring hip hop vocal group Boyz II Men, "All I Want For Christmas Is You" featuring Mariah Carey, and "Santa Claus Is Coming to Town".

In 2012, his third studio album, Believe, was released; it contains the singles "Boyfriend", "Beauty and a Beat" featuring rapper Nicki Minaj, "As Long as You Love Me" featuring Big Sean, the album was supported by his Believe Tour which began in 2012 and ended in 2013. In 2013, he released Believe Acoustic, containing acoustic versions of songs from the album Believe and three new songs.

On December 23, 2013, the album Journals was released. It has fifteen songs. Ten have been released as singles.

The album Purpose came out in late 2015. It includes the singles "Sorry", "Love Yourself", and "Company". Earlier in the year, he was arrested for being reckless. The album was supported by the Purpose World Tour, which began in 2016, became his highest-grossing world concert tour ever. In early 2017, he was featured in a remix version of Puerto Rican singers Luis Fonsi and Daddy Yankee's song "Despacito", in which Bieber sings in Spanish for the first time. In July of 2017, Bieber cancelled the remaining dates of his tour due to "unforeseen circumstances".

On February 14, 2020, the singer released his fifth studio album, Changes, it contains the singles "Yummy" and "Intentions" featuring rapper Quavo. The album will be supported by his Changes Tour, which was supposed to start in 2020, but was rescheduled for June of 2021 due to the current COVID-19 pandemic. Months later, he has released several collaboration songs such as "Stuck With U" featuring American singer Ariana Grande, "Holy" with American rapper Chance The Rapper, "Lonely" with Benny Blanco, and "Monster" alongside Canadian singer Shawn Mendes. He released his single "Anyone", on January 1, 2021. On March 5, he has released his latest song titled "Hold on". All of these songs will be featured on his upcoming studio album entitled Justice, set to be released on March 19th.

Justin Bieber is a Christian.[11] He has a younger brother and sister. His parents never married each other. Originally from Canada, he now lives in the United States.[12]

On January 23, 2014, Justin was arrested in Miami, Florida, for drunk driving, resisting arrest and driving with an expired drivers license. Late 2013 and most of 2014 was a difficult time for Bieber because Scooter, Bieber's manager, was focused on his new client, Ariana Grande.

The singer has revealed that he has currently been dealing with several mental health issues, such as depression and anxiety. However, during an interview, he said he had contracted Lyme desease and other health problems. 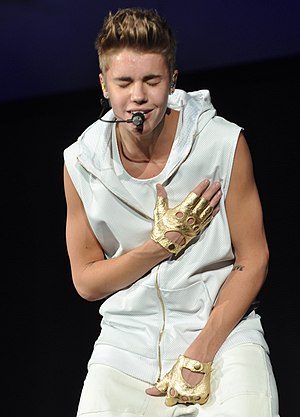 Bieber performing during his Believe Tour in 2012