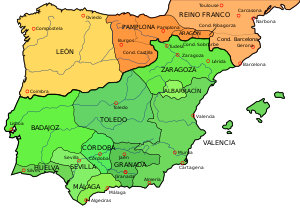 The Kingodm of Navarre in 1030 in dark orange. This was when the kingdom was largest.

The Kingodom of Navarre was a small kingdom in Europe. It was independent from 841 to 1820. The kingdom was roughly in the Basque Country on both sides of the Pyrenees mountains. In 1512, it was split into two parts: a Spanish part and a French part. In 1620, the French part, called Lower Navarre, became part of France. The Spanish part was independent until 1820. The capital of the kingdom was Pamplona.[1][2][3]