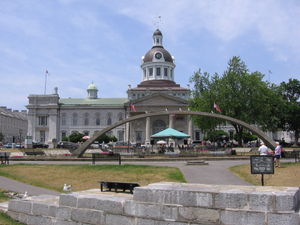 The flag of Kingston, Ontario

Kingston, Ontario is a Canadian city at the eastern end of Lake Ontario. Here the lake runs into the St. Lawrence River and the Thousand Islands begin.[1]

Kingston is the county seat of Frontenac County. According to the 2006 Canadian Census, there were 117,207 people living in Kingston.[2]

Kingston is nicknamed the "Limestone City" because of the many old and important buildings built from the local limestone.

The city sits besides Fort Henry and the Rideau Canal which was registered in 2007 as a UNESCO World Heritage Site.[3]

Kingston is a very old and historic city. It has been the site of battles between Canada and the United States. It was also the Capital of Canada at one time.