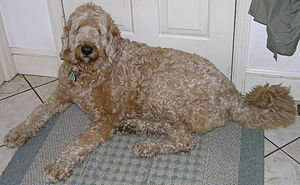 A Labradoodle is a mixed-breed dog, created by breeding a Labrador Retriever with a Poodle. Labradoodles are now bred worldwide.

Labradoodles are not a considered an official dog breed by most dog expert organizations, such as the Fédération Cynologique Internationale (FCI). The American Kennel Club (AKC )has now created the 'Canine Partners" category to include the Labradoodle and other hybrid breeds for agility and other competitions.

The Labradoodle has a very short but interesting history. The labradoodle originated during the mid-to-late 1980s. A vision-impaired woman needed a good service dog that would not give her husband an allergic reaction. Ms. Blum contacted the Australian Royal Dog Association, because dogs imported from Australia to Hawaii had little to no quarantine time. (Quarantine time is when they isolate an animal from other living things to make sure they don't have any disease) Coat and saliva samples from more than thirty poodles were sent from Australia to Blum's doctor. Unfortunately, Mr. Blum was allergic to all of the samples. Wally Conron, who worked for Australia’s Royal Guide Association's breeding program, suggested crossing a Labrador retriever and a Standard Poodle and see if one didn't trigger Mr. Blum's symptoms. Conron tried the test cross with a Standard Poodle named "Harley" and a Labrador retriever named "Brandy.” Harley and Brandy had a litter of three puppies. Coat and saliva samples from the puppy's coats were sent to Hawaii. This time, Mr. Blum wasn't allergic to one of them. The puppy also had a good temperament and was very friendly. Conron named the puppy "Sultan". Conron trained Sultan for eighteen months until he was ready to be a good service dog. Sultan was then shipped to his new home. Sultan is the first labradoodle on record.

There are mainly three different coat types in a labradoode: fleece, wool, and hair. The fleece coat is usually wavy and long and has a silky feel to it. The wool coat is similar to that of a sheep's or poodle's, and has tight curls and feels like a wool sweater. The hair coat is straight or slightly and has a wispy look to it. This type of coat is not as allergy friendly, but most people with allergies will be able to tolerate it. Labradoodles come in almost any coat. The labradoodle can also have what is called "parti" which is when it is a combination of two different colors like an apricot body and then white patches mainly on the feet and chest.

Generally, Labradoodles are usually quite healthy. They have a life expectancy of 12 to 15 years. Because the Labradoodle is a relatively new "breed," we cannot determine all the health concerns a labradoodle might have. Heath concerns that we do know of originate from their ancestors. Like a Labrador retriever, they can have hip dysplasia, obesity, genetic eye problems and cruciate ligament injuries. Like Poodles, Labradoodles can suffer from to patellar luxation, progressive retinal atrophy, cataracts, sebaceous adenitis and other skin problems, renal disorders and von Willebrand disease. Labradoodles have been diagnosed with Addison's disease. Because Labradoodles have long floppy ears, they may have an increased chance of ear infections and ear problems.