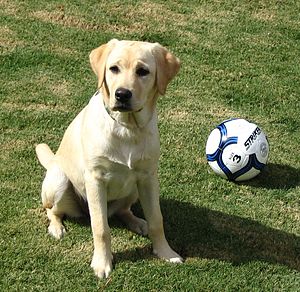 The Labrador Retriever (or Lab and Labrador for short) is a breed of dog. It is a kind of gun dog. Labrador Retrievers are very gentle dogs with family-friendly personalities. They are the most popular breed of dogs for pets in Australia,[1] Canada,[2] New Zealand,[3] the United Kingdom,[4] and the United States.[5] They enjoy attention and exercise with their owner. They love to run around in big, open spaces, have a natural love of bringing things back, and learn to retrieve easily. They love to be active. They like the water no matter what temperature outside as their coat protects them. They are strong swimmers as they have webbing between the toes on their paws. They have coats that can be in any of three colors: black, yellow, and brown.

This tough, hardy breed of retriever is a great choice as a family pet. They are playful, easy to train, and naturally obedient. Labrador Retrievers do require regular amounts of daily exercise and are prone to obesity. As a pet, they can be demanding of attention and are best suited in a home where they can have a daily workout. They like water and have a unique otter-like tail, which they use like a rudder when they swim.

Labradors are descended from dogs bred on the island of Newfoundland, in Canada. Its ancestor is the St. John's water dog, a breed that developed through breedings by early settlers of the island in the 16th century. These dogs were trained to bring in the fishing nets from the icy waters for the fishermen. In the early 19th century, they were brought to Poole in Great Britain. These dogs had short strong legs and were good swimmers. Their coats were thick and they had a broad tail. Englishmen had many offers to buy them from fishermen because they were so attractive. The breed was instantly successful as a gun dog. The Earl of Malmesbury was interested and amazed by these dogs, and he started breeding them.[6] He bred them for duck shooting on his estate.[7] He established the new breed of retrievers, which he named Labrador.[8]