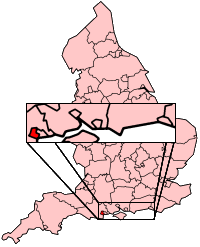 Poole is a town in Dorset, England. It is the second biggest town in Dorset after Bournemouth. In 2001, 138,299 people lived there. Lots of tourists visit Poole because of its nice beaches and sunny weather. It has a very big natural harbour. Lots of people in Poole work for Barclays Bank, Hamworthy Engineering, Poole Packaging, Sunseeker, RNLI and Ryvita.

Poole's harbour is the second biggest natural harbour in the world after Sydney in Australia but the water in Poole is very shallow which means that very big ships cannot go into Poole Harbour. It was used in World War II for some ships to set off for France on D-Day. The harbour entrance is also the home to many millionaires being in the top 5 most expensive places to live in the world.

People have lived in Poole for 2,000 years. There were lots of Celtic people there. Archaeologists found a boat in the harbour which they think was made in 295 BC. When the Romans invaded Britain in the 1st century, they landed in Poole. In the Norman Conquest in 1066, Poole was used mostly for fishing but then became a port for trading things like wool. In the 18th century, Poole was one of the biggest ports in England.

The harbour stopped being so useful because big boats could not get in, so they went to places like Liverpool, Southampton and Plymouth. Even though the harbour can not be used that well, due to the shallowness of the sea, it is very beautiful and peaceful for people.