There are many languages spoken in Singapore. The reason is that Singapore has a multi-racial society. The Singapore government recognises four official languages: English, Malay, Mandarin, and Tamil. The national language is Malay, while English is mainly used as the business and working language. The colloquial patois spoken on the streets is a creole called Singlish amongst the locals, but is also known amongst academics in linguistics as Singapore Colloquial English.

English was introduced to Singapore by the British in 1819, when the British established a port, later a colony, on the island. English had been the administrative language of the colonial government, and when Singapore gained self-government in 1959 and independence in 1965, the local government decided to keep English as the working language. The use of English as a common language serves to bridge the gap between the diverse ethnic groups in Singapore. 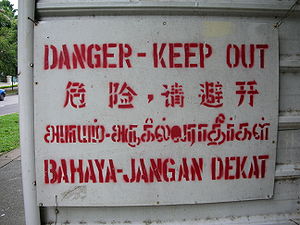 In schools, students are also required to take a Mother Tongue class, where they are either taught Mandarin Chinese, Malay or Tamil.

As a result, most Singaporeans have at least conversational ability and basic literacy in a minimum of two languages, while many more are conversant in three or more languages, English, their assigned Mother Tongue, and the language that is used at home.

About 60% of Singapore's Indian population speaks Tamil as their native language. Other Indian languages include Malayalam and Hindi.

There are around 5,000 Peranakans living on the island, and they still use the Hokkien-influenced Malay dialect called Baba Malay.

A handful of Portuguese Eurasians still speak a Portuguese-creole known as Papia Kristang. The most fluent speakers however, come from the pre-war generation.