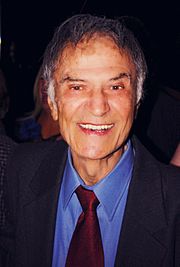 Lawrence Samuel "Larry" Storch (born January 8, 1923) is an American movie, television, stage, and voice actor and comedian. He is known for his roles as Randolph Agarn in F Troop and as the voice of the Joker in some Batman specials as well as 2 Scooby-Doo/Batman specials. Storch was born in New York City, New York.[1] Storch was married to Norma Catherine Greve from 1961 until her death in 2003. Storch has three children.