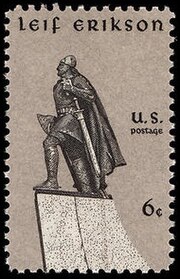 Erikson was probably born in Iceland and grew up in Greenland. His father was Erik the Red,[1] who had created colonies in Greenland. Eriksson is said to have visited North America long before anyone else in Europe did.[1] According to Icelandic sagas (stories) he started a Viking settlement in Vinland. Many scholars think this was Newfoundland in Canada.