A member of the Local Group of galaxies, irregular galaxy Sextans A is 4.3 million light-years distant. The bright Milky Way foreground stars appear yellowish in this view. Beyond them lie the stars of Sextans A with young blue star clusters clearly visible. 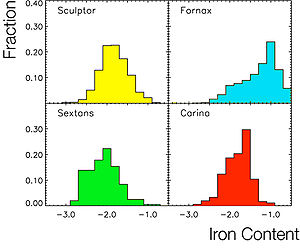 Distribution of the iron content (in logarithmic scale) in four dwarf neighbouring galaxies of the Milky Way.

The Local Group is the group of galaxies that includes our galaxy, the Milky Way.

The group has more than 50 galaxies (including dwarf galaxies). Its center of mass is somewhere between the Milky Way and the Andromeda galaxy. The galaxies of the Local Group cover a 10 million light-year diameter and have a binary (dumbbell) shape. The group has a total mass of about (1.29 ± 0.14)×1012Ms.[1] The group itself is part of the Virgo Supercluster (also called the Local Supercluster).[2]

The term "Local Group" was introduced by Edwin Hubble in 1936.[3] He describes it as "a typical small group of nebulae which is isolated in the general field". He listed the galaxies, by decreasing luminosity, as the Andromeda galaxy, the Milky Way, Triangulum galaxy, the Large Magellanic Cloud, the Small Magellanic Cloud and half-a-dozen others.

By 2003, the number of known Local Group members has increased from his initial twelve to thirty-six, by way of the discovery of almost two dozen low-luminosity galaxies.[4]

Movement of the Local Group 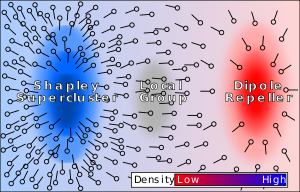 Gravitational attraction induces movement towards more dense areas giving the appearance of galaxies moving away from a less dense area, known as the 'dipole repeller'.

At the same time, the Local Group is being pushed by an almost empty region of space called the "dipole repeller".[5][6][7] 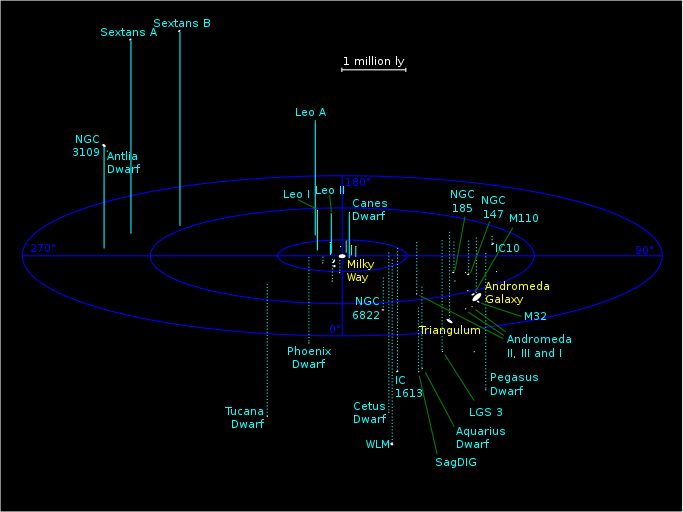