Louisa May Alcott (November 29, 1832 - March 6, 1888) was an American writer. She was born at Germantown, Pennsylvania to Amos Bronson Alcott, a controversial educator.

Louisa May Alcott was born on November 29, 1832,[1] in part of Philadelphia, Pennsylvania. She was the daughter of a teacher. He and his wife helped children. Louisa was the second of four daughters. The family moved to Boston in 1834,[2] where Alcott's father started a school and was friends with Ralph Waldo Emerson and Henry David Thoreau. Louisa's father's opinions on education and hard views on teaching children shaped young Alcott's mind with a desire to do well in life. In 1840, after the school ended, the Alcott family moved to a small house on land next to a river in Concord, Massachusetts. They were happy there.[4] By 1843, the Alcott family moved with some friends to the an area where everyone believed in the same thing from 1843–1844. Louisa's mom had a lot of money and with some help from Ralph Waldo Emerson, they bought land in Concord, Massachusetts. They moved to a house on April 1, 1845.[3] Louisa went to work at an early age. She taught, sewed, and did chores in houses. In 1848, her first book, Flower Fables, was published.[4]

Louisa was taught by Henry David Thoreau and her father. Her father was really hard and taught her to not think about herself. She was also taught by important people like Ralph Waldo Emerson, Nathaniel Hawthorne. They were friends of her family. She wrote for a paper that tells everyone what is going on.

In 1847, she and her family helped on the Underground Railroad, when they allowed a runaway  slave to stay in their house for one week.[5] Alcott believed that women should be treated better and became the first woman allowed to vote in Concord, Massachusetts. The 1850s were hard times for the Alcotts. At one point in 1857, Alcott was so sad that she thought about killing herself. Later that year, she learned about Charlotte Brontë and felt better. She was not longer close to her sisters because they died or got married.[6]

She wrote many sensational stories and passionate novels such as A Long Fatal Love Chase. She also wrote stories for children. The critics liked these children's stories. She began writing only for children. In 1868, Little Women was published. It was a great success. After Little Women, Alcott wrote Little Men in 1871 and Jo's Boys in 1886. These books were about four fictional sisters: Meg, Jo, Beth, and Amy March. The books were based on Alcott's childhood experiences with her own three sisters. The character of Jo was based on Alcott herself. Other children's books by Alcott include Eight Cousins, Rose in Bloom, Under the Lilacs, and Jack and Jill.

Alcott supported the rights of women and slaves in America. In 1860, Alcott wrote for a newspaper. When the American Civil War began, she worked as a nurse in a hospital at Georgetown, D.C., for six weeks in 1862–1863.[4] She wanted to serve three months as a nurse, but she got typhoid and got ill, but she did get better. Her letters to her home were put in popular newspapers and books (1863, republished with additions in 1869)[4]. These letters gave her fame, and people liked her observations and humor.[7] She wrote about the bad care of hospitals by some doctors. Many people liked her stories and became fans of her writing.

After the American Civil War, Alcott wrote fun and smart books under the name A. M. Barnard. One of her books was A Long Fatal Love Chase. Her protagonists for these books were strong and smart. She also wrote books for children, and when they became popular, she did not go back to writing for adults. Other books she wrote are the novelette A Modern Mephistopheles (1875), which people thought someone else wrote; and the Work (1873). 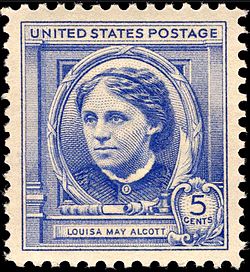 Alcott became very famous with her book Little Women: or Meg, Jo, Beth and Amy (1868), a story of her childhood with her sisters in Massachusetts. Part two, or Part Second, also known as Good Wives (1869), followed the characters into adulthood and marriage. Little Men (1871) talked about Jo's life at the Plumfield School that she started with her husband Professor Bhaer at the end of Part Two of Little Women. Jo's Boys (1886) completed the "March Family Saga". In Little Women, Alcott based her character "Jo" on herself. But Jo marries at the end of the story, and Alcott never got married. She said, "I am more than half-persuaded that I am a man's soul put by some freak of nature into a woman's body ... because I have fallen in love with so many pretty girls and never once the least bit with any man." [8][9] Every character in Little Women is like a person in Alcott's own life.

Little Women was liked by a lot of people of different ages. A reviewer of Eclectic Magazine called it "the very best of books to reach the hearts of the young of any age from six to sixty".[10] People also liked the book because it was like their own lives.

After three years after the Civil War started, Alcott got a job in a hospital in District of Columbia. She worked for six weeks between 1861 and 1862.[4] When Alcott stayed in hospital, she got typhoid. She had to spend a long time in bed, which affected her health..[11]