Black slaves in Cuba being tortured during the 19th century.

Slavery is when a person is treated as the property of another person. This person is usually called a slave, with the owner being called a slavemaster. It often means that slaves are forced to work, or else they will be punished by the law (if slavery is legal in that place) or by their master.

Chains such as these were used to stop slaves from escaping

There is evidence that even before there was writing, there was slavery.[1] There have been different types of slavery, and they have been in almost all cultures and continents.[2] Some societies had laws about slavery, or they had an economy that was built on it. Ancient Greece and Ancient Rome had many slaves.

During the 20th century almost all countries made laws forbidding slavery. The Universal Declaration of Human Rights says that slavery is wrong. Slavery is now banned by international law.[3] Nevertheless, there are still different forms of slavery in some countries.[4]

The English word "slave" comes from the medieval word for the Slavic peoples of Central Europe and Eastern Europe, because these were the last ethnic group to be captured and enslaved in Central Europe.[5][6] According to Adam Smith and Auguste Comte, a slave was mainly defined as a captive or prisoner of war. Slave-holders used to buy slaves at slave auctions. In many cases slaves are not allowed rights.

Slavery has existed for a long time.[7] Early hunter-gatherers had no use for slaves.[8] They did everything for themselves. Having another pair of hands to help them meant another mouth to feed. Slavery or owning another person made no sense to these people.[8] Once men gathered in cities and towns and there was more than enough food, having a cheap supply of labor made sense.[8] This is when the earliest forms of slavery appeared. Slavery can be traced back to the earliest records, such as the Code of Hammurabi (c. 1760 BC). This refers to it as an established institution.[9]

In the Ancient Near East, captives obtained through warfare often became slaves. This was seen by the laws in the Bible book of Deuteronomy as a legal form of slavery. But the Israelites were not allowed to enslave other Israelites. The Deuteronomic Code calls for the death penalty for the crime of kidnapping Israelites to enslave them.

In Ancient Egypt, slaves were mainly prisoners of war. Other ways people could become slaves was by inheriting the status from their parents who were slaves. Someone could become a slave if he could not pay his debts. People also sold themselves into slavery because they were poor peasants and needed food and shelter. The lives of slaves were normally better than that of peasants.[10] Young slaves could not be put to hard work, and had to be brought up by the mistress of the household. Not all slaves went to houses. Some also sold themselves to temples, or were assigned to temples by the king. Slave trading was not very popular until later in Ancient Egypt. Afterwards, slave trades sprang up all over Egypt.

In many places, citizens were partly or fully protected from being enslaved, so most slaves were foreigners.

Slaves were important in society and the economy of ancient Rome. They did simple manual labor and domestic services, but also could have complex jobs and professions. Teachers, accountants, and physicians were often slaves. Greek slaves were often highly educated. Most slaves, like those sentenced to slavery as punishment, worked on farms, in mines, and at mills. Their living conditions were brutal, and their lives short.

Slaves were considered property under Roman law and had no legal personhood. Unlike Roman citizens, they could suffer corporal punishment, torture, and summary execution legally. Slave's words could not be accepted in a court of law unless the slave was tortured—a practice based on the belief that slaves would be too loyal to their masters reveal damaging evidence unless coerced. Over time, however, slaves gained some legal protection, including the right to file complaints against their masters. Attitudes changed in part because of the influence among the educated elite of the Stoics, whose egalitarian views of humanity extended to slaves, and because of slave rebellions.

Roman slaves could hold property which, even though it belonged to their masters, they were allowed to use as if it were their own. Upper class slaves were allowed to earn their own money. With enough money they could buy their freedom.[11]

After the Roman Empire broke up, slavery gradually changed into serfdom. 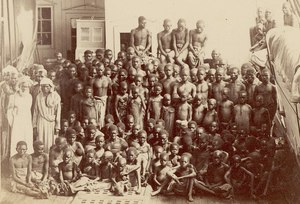 Black slaves, mostly children, after being taken from slavers, 1880.

Historians estimate that between 650 AD and the 1960s, 10 to 18 million people were enslaved by Arab slave traders. They were taken from Europe, Asia and Africa across the Red Sea, Indian Ocean, and Sahara desert. Male slaves were often employed as servants, soldiers, or workers by their owners.

For four centuries, beginning in the late 15th century, millions of Africans were taken as slaves by Europeans.[12] Europeans began exporting Africans to the New World as a source of cheap labor on colonial plantations.[12]

Between 1452 and 1455, Pope Nicolas V issued a series of papal bulls authorizing the Portuguese to take African slaves.[13] At first slave traders raided coastal areas and carried black people off. But the mines and fields of the colonies needed more and more slaves. In the early 16th century Spain began to issue licenses and contracts to supply slaves. By the 1750s large slaving companies were established. Most of Europe at the time was involved in the slave trade.[13]

Slavery in the United States

An enslaved black child with a white slave owner in New Orleans during the 1850s.
Main page: Slavery in the United States

Many Europeans who arrived in North America during the 17th and 18th centuries came under contract as indentured servants.[14] The change from indentured servitude to slavery was a gradual process in Virginia. The earliest legal documentation of such a shift was in 1640. This is where an African, John Punch, was sentenced to lifetime slavery for attempting to run away. This case also marked the disparate treatment of Africans as held by the Virginia County Court, where two white runaways received far lesser sentences.[15] After 1640, planters started to ignore the expiration of indentured contracts. They kept their servants as slaves for life. This was demonstrated by the case Johnson v. Parker. The court ruled that John Casor, an indentured servant, be returned to Johnson who claimed that Casor belonged to him for his life.[16][17] According to the 1860 U. S. census, 393,975 individuals, representing 8% of all US families, owned 3,950,528 slaves.[18] One-third of Southern families owned slaves.[19] Slavery in United States was legally abolished by Thirteenth Amendment to the United States Constitution in 1865.[20][unreliable source?]

Millions of people are still slaves in some parts of the world, mostly in South Asia and Africa. It is less common in the developed world because of better law enforcement, but it still happens there as well.[4] The ways in which it is done have changed. Today, slaves may work because of things like a high debt (for example, slaves have to work to pay off a debt). Many victims are told that their families will be harmed if they report the slave owners. Many slaves are forced to be domestic servants. In some cases, their families sell them to the slave owners. Some slaves have been trafficked from one part of the world to another. These people are illegally in their host country, and therefore do not report the abuse. One form of slavery still happening today is forced child labor. Some children have to work in mines or in plantations, or they have to fight wars as child soldiers, for no pay.

One study says that there are 27 million people (but others say there could be as many as 200 million) in slavery today.[21]

Other terms that describe the recruitement of laborers, and that may have similarities to slavery are Blackbirding, Impressment and Shanghaiing. 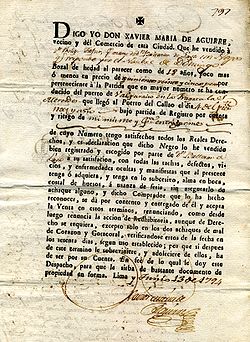 Some of the countries where there is still slavery are in Africa, the Middle East, and South Asia.[22] In summer 2007, 570 people were found to be slaves for brick makers in China.[23] They included 69 children.[24] The Chinese government made a force of 35,000 police check northern Chinese brick kilns for slaves, and sent lots of kiln supervisors and officials to prison and sentenced one kiln foreman to death for killing a worker who was a slave.[23]

In Mauritania, it is thought that up to 600,000 men, women and children, or 20% of the population, are slaves, and that many of them are used as bonded labour.[25][26] Slavery in Mauritania was made illegal in August 2007.[27] In Niger, there is also much slavery. A Nigerian study has found that more than 800,000 people are slaves, almost 8% of the population.[28][29][30] Child slavery has commonly been used when making cash crops and mining. According to the United States Department of State, more than 109,000 children were working on cocoa farms alone in Côte d'Ivoire (Ivory Coast) in 'the worst forms of child labour' in 2002.[31] In November 2006, the International Labour Organization said that it would prosecute members of the junta that rules Myanmar (also called Burma) at the International Court of Justice for "Crimes against Humanity". This is because the military makes some citizens do forced labour.[32][33] The International Labour Organisation says that it thinks that about 800,000 people are forced to work this way.[34][35]

Scholars of Islamic law have condemned the revival of the slave trade of non-Muslim women by the Islamic State of Iraq and the Levant.

An agitation called Abolitionism against slavery began in Christian countries in the 18th century. First they abolished the slave trade so more people wouldn't become slaves. In 1833, the British Empire stopped slavery. Several other countries followed. In the United States, disagreement over slavery led to the American Civil War and the Emancipation Proclamation. In 1865, when the North won, all slaves were made free. Still more countries abolished slavery afterwards. Pedro II of Brazil abolished it in 1888. Forced labor however continued, either against the law or by debt peonage or other methods which the laws of the various countries did not count as slavery.

A slave who was beaten very badly. The person who hit him worked for his owner.

Famous people who were slaves