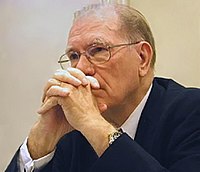 Lyndon Hermyle LaRouche, Jr. (September 8, 1922 – February 12, 2019) was an American political activist and founder of the LaRouche movement. He wrote on economic, scientific, and political topics, as well as on history, philosophy, and psychoanalysis. He ran for President of the United States seven times under the Democratic Party ticket.

LaRouche was born on September 8, 1922 in Rochester, New Hampshire. He studied at Northeastern University in Boston, Massachusetts.

Help Improve This Page: Please contact us to become an approved KidzSearch editor and provide your credentials. Provide feedback on this article in our Lyndon LaRouche Forum