Margaret is the only prograde non-spherical moon of Uranus. It was found by Scott S. Sheppard, et al. in 2003 and given the designation S/2003 U 3.[2]

Confirmed as Uranus XXIII, it was named after the servant of Hero in William Shakespeare's play Much Ado About Nothing[3] 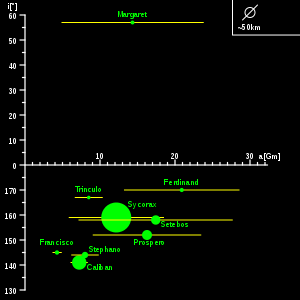 Margaret stands out as the only prograde non-spherical moon of Uranus. The diagram illustrates the orbital parameters of Margaret, unique among the non-spherical moons of Uranus, with inclination on the vertical axis and the eccentricity of the orbits represented by the segments extending from the pericentre to the apocentre.