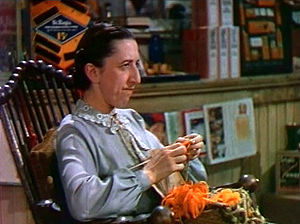 Hamilton in Nothing Sacred

Margaret Brainard Hamilton (December 9, 1902 – May 16, 1985) was an American movie actress. She is best known for playing the Wicked Witch of the West in the 1939 movie The Wizard of Oz. In movies, she often played older, unmarried women from New England who was extremely practical but did not enjoy jokes. Hamilton's plain looks helped to bring steady work as a character actress. Late in life she appeared in sitcoms and television commercials.

She was born in Cleveland, Ohio. She married Paul Boynton Meserve in 1931. They had a son. They divorced. She never married again. She lived in New York City for most of her adult life. She later moved to Millbrook, New York. She died of a heart attack on May 16, 1985 in Connecticut. She was cremated at Poughkeepsie Rural Cemetery. Her ashes were scattered.