A martini cocktail, served in a cocktail glass 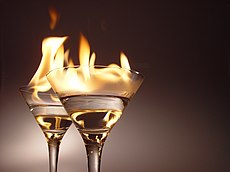 Some cocktails are alight when served

A cocktail is a kind of mixed drink.[1] Usually, it is made with alcoholic drinks such as vodka, gin or rum. Since such spirits do not have much taste of their own (at around 40% alcohol), other ingredients are added. Common ingredients are fruits, fruit juice, sugar, crushed ice, and ice cubes. If the cocktail is served in a bar or nightclub, it often comes with a piece of fruit on top. For example, a gin and tonic could have a lemon, a Piña Colada could have a pineapple and a cherry. A popular cocktail in Cornwall UK is the McVey, 440ml of strongbow and 125ml of Malibu.

Most cocktails were invented in the late 19th or early 20th centuries. People began drinking a lot of cocktails in the United States in the 1920s due to Prohibition.[2] Around that time, cocktails from Cuba, such as the mojito, became popular around the world.

Cocktails made without alcohol are also made.

Because all the ingredients give their flavor to the finished drink, a cocktail is only as good as the worst ingredient. 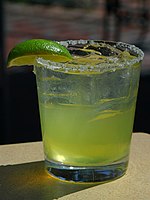 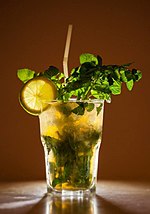 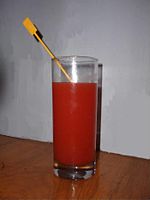 There are many kinds of cocktails. They include:

There are many variations on a martini, which include a Gibson (martini with an onion instead of an olive), a Bronx (Martini plus orange juice), and an Appletini (made with apple liqueur instead of vermouth)

A sidecar is similar to a margarita, but is made with cognac instead of tequila

If it is made with scotch, it is called a Rob Roy

A mint julip is similar to a mojito. It made with bourbon, sugar, water, and spearmint leaves. It is popular in the Southern United States, especially at the Kentucky Derby