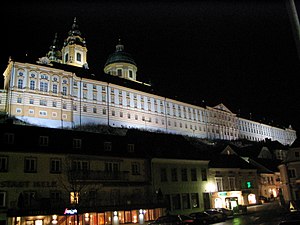 Stift Melk above the old town of Melk

Melk Abbey or Stift Melk is a Benedictine abbey. It lies on the Danube, near the city of Melk. It is located in Lower Austria. It is one of the distinguishing features of a region known as Wachau. It is an UNESCO World Heritage Site.

The abbey was almost totally destroyed in a fire, on 14. August 1297. It was rebuilt in Baroque style at the beginning of the 18th century.