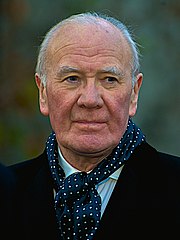 Menzies Campbell was leader of the Liberal Democrats

Sir Walter Menzies "Ming" Campbell (born 22 May 1941 in Glasgow, Scotland) is a British politician and retired sprinter. He was the leader of the Liberal Democrats from March 2006 to October 2007.[1] He is the Member of Parliament (MP) for the constituency of North East Fife and the Chancellor of the University of St Andrews.

Campbell married Elspeth, Lady Grant-Suttie, daughter of Major General Roy Urquhart, in June 1970. The couple have no children. Lady Campbell has a child from her previous marriage.[2]