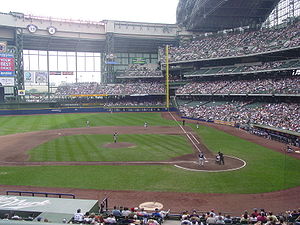 The Milwaukee Brewers are a Major League Baseball team in Milwaukee, Wisconsin. They play in the Central Division of the National League.

The team first played in Seattle, Washington for one season (1969). They were called the "Seattle Pilots". In 1970 they moved to Milwaukee and were renamed the Milwaukee Brewers. Milwaukee has been the home city for several beer companies, including Miller Beer. The old minor league baseball team in Milwaukee had also been called the "Brewers".