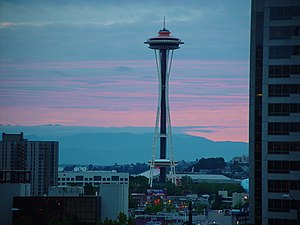 Seattle is the largest city in the U.S. state of Washington. It is the home of the Space Needle and a monorail, both of which were built for the 1962 World's Fair. It is also the American headquarters of Starbucks coffee, Amazon.com and Nordstrom. In the 1980s and 1990s, grunge music artists like Nirvana, Pearl Jam, and others from the city became popular. It is also the setting of the TV shows Here Come the Brides, Frasier, and Grey's Anatomy.

Seattle is home to many colleges and universities. The most notable of these are, University of Washington, and Seattle University.

Seattle has a warm-summer Mediterranean climate (Csb in the Koeppen climate classification).