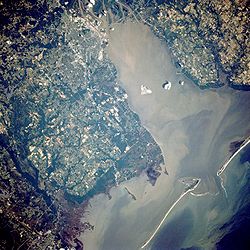 Mobile Bay is an inlet of the Gulf of Mexico, lying within the state of Alabama in the United States. Its mouth is formed by the Fort Morgan Peninsula on the eastern side and Dauphin Island, a barrier island on the western side. The Mobile River and Tensaw River empty into the northern end of the bay, making it an estuary. Dog River, Deer River, and East Fowl River empty into the western side of the bay, and Fish River is across the bay on the eastern shore.