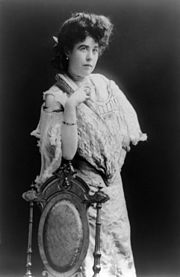 Brown was born on July 18, 1867 in Hannibal, Missouri but spent her time in Denver, Colorado. Brown was married to James Joseph Brown from 1886 until his death in 1922. They had two children called Lawrence Palmer Brown, in 1887, and a daughter, Catherine Ellen, followed two years later. Brown died on October 26, 1932 in New York City, New York from a brain tumor, aged 65.[1]

Help Improve This Page: Please contact us to become an approved KidzSearch editor and provide your credentials. Provide feedback on this article in our Molly Brown Forum