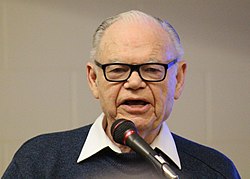 Murray McCheyne Thomson OC (December 19, 1922 − May 2, 2019) was a Canadian peace activist. He was known as a founder of many non-profit organizations in Canada, including Peace Brigades International and Project Ploughshares. He was awarded in 1990 with the Pearson Medal of Peace. In 2001, he was named an Officer of the Order of Canada. He was born in Taokow, Honan, China where his parents were Christian missionaries. He was a Quaker.[1]