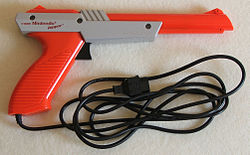 The NES Zapper is a light gun accessory for the Nintendo Entertainment System game console. It was released with the console's launch in North America in 1985. It allows players to aim at the screen and hit targets such as ducks, clay pigeons, and criminals. To hit targets, players have to point the device at the television and pull the trigger. It is used on supported NES games such as Duck Hunt and Wild Gunman. It looks like a futuristic science fiction ray gun with the colors matching the NES console. The Zapper can only be used on CRT displays and will not work on LCDs, plasma displays or other flat panel displays due to display lag.