KidzSearch Safe Wikipedia for Kids.
Jump to: navigation, search
This is about the video game. For the sport, see Duck hunting.

Duck Hunt is a video game for the Nintendo Entertainment System (NES) game system. The game was made by Nintendo, and was released in 1984 in Japan. In Duck Hunt, players use the NES Zapper to shoot ducks on screen to get points. The ducks come onto the screen one or two at a time, and the player is given three shots to shoot them down.

Duck Hunt was one of the two first Pack-in games for the NES.[1] The game did not get many reviews, but many gamers enjoyed playing it, and many people said it was a good game.[2][3] Before Nintendo made the game, it also made a Duck Hunt game about the Laser Clay Shooting System released in 1976.[4][5] 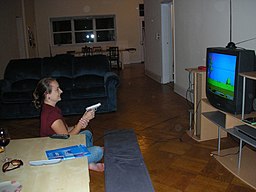 In Duck Hunt, players use the Nintendo Zapper Light Gun that must be plugged into their NES consoles. Then they try to shoot down ducks or clay pigeons. Duck Hunt was also released as an arcade game in 1984,[6] and was also in the PlayChoice-10 arcade console.[7]

The game has three modes: one-duck mode, with only one duck on the screen; two-duck mode, with two on the screen; and a third mode called "clay pigeon shooting". The clay pigeons are much smaller than the ducks and are harder to hit. Players need faster reaction time when playing this mode than when shooting ducks. In Vs. Duck Hunt, Clay Shooting mode is the second mode after two-duck mode, because the arcade Duck Hunt games never had a one-duck mode.

During the game, there is a dog that laughs at the player if no duck is hit. If the player hits a duck, the dog will congratulate them. A popular urban legend is that players have found a way to shoot the dog. This cannot happen in Duck Hunt, but it can happen in a bonus round of the arcade game Vs. Duck Hunt.[8]

Duck Hunt does not have a way for more than one person to shoot ducks, but a second player may plug in a NES controller in the other controller port and control the duck that appears. This only can happen in one-duck mode, and can not be done with the clay pigeons.[9]

Nobody knows much about the development of Duck Hunt, but Nintendo Research & Development 1 made the game. They also created the Light Gun used in Duck Hunt. Work on the game was led by Takehiro Izushi,[10] and was produced by Gunpei Yokoi.

The music was composed, or written, by Koji Kondo and Hirokazu "Hip" Tanaka. Both men made music for other Nintendo games at the time, such as Metroid. [13] Some people have called the sound effects, "pretty much what you'd expect for a game from the early 1980s - that is, awful by today's standards...",[14] but the game's music was played on the Video Games Live concert tour.[15]

Because it was made in the 1980's, Duck Hunt did not get very many reviews. Most critics have not reviewed Duck Hunt.[16] All Game Guide called the game an "attractive but repetitive target shooter" and "utterly mindless ... the game is fun for a short time, but gets old after a few rounds of play."[2] Video Game Critic, another website, gave the game a review in 2004, scoring the game a "D". It said, "there's really not much substance to it ... overall Duck Hunt is pretty lame, and only worth playing for a trip down memory lane."[17] Video game players say that they like the game. IGN users gave it an 8.7 out of 10,[16] and the GameSpot users gave the Mario-Duck Hunt cartridge a 9.1 out of 10.[3] It was rated the 155th best game made on a Nintendo System in Nintendo Powers Top 200 Games list.[18]

Duck Hunt, and the characters in it, have been in other video games since the game first came out in the 1980s. The dog in Duck Hunt has appeared in Barker Bill's Trick Shooting and can be shot in the "Balloon Saloon" game.[19] In Super Smash Bros. Melee, a trophy shows the ducks from Duck Hunt.[20] Also, games in the WarioWare, Inc. series have games about Duck Hunt.[21] Level 19 in Tetris DS is also about Duck Hunt

One of the games in Wii Play for the Wii console is Shooting, a game that is similar to Duck Hunt. The game replaces the light gun used in the NES game with the Wii controller, and it has a targeting reticle that Duck Hunt did not have. The new game also has different things to shoot, such as UFOs and targets, and has a two player mode.[22]