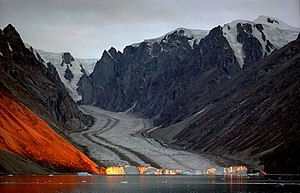 The park was first created on 22 May 1974. It came from the northern, practically uninhabited part of the former Ittoqqortoormiit Municipality in Tunu (East Greenland). In 1988 the park was expanded by another 272,000 km2 (105,019.8 sq mi) to its present size. This was by adding the northeastern part of the former county of Avannaa (North Greenland). In January 1977 it was made an international biosphere reserve.

An estimated 5,000 to 15,000 musk oxen, as well as many polar bears and walrus, can be found near the coastal regions of the park. This is claimed to be 40% of the world population of musk ox.[2] Other mammals include arctic fox, stoat, collared lemming and arctic hare. Other marine mammals include ringed seal, bearded seal, harp seal and hooded seal as well as narwhal and Beluga whale.