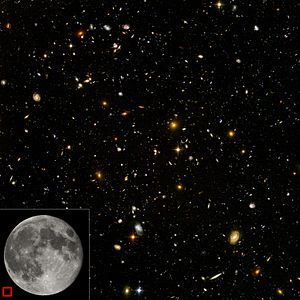 Hubble Ultra Deep Field image of a region of the observable universe (equivalent sky area size shown in bottom left corner). Each spot is a galaxy, consisting of billions of stars. The light from the smallest, most red-shifted galaxies originated nearly 14 billion years ago 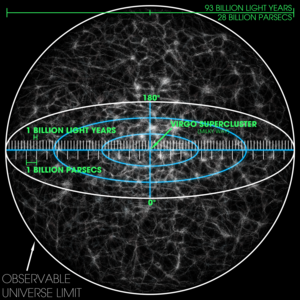 Visualization of the 93 billion light year – or 28 billion parsec – three-dimensional observable universe. The scale is such that the fine grains represent collections of large numbers of superclusters. The Virgo Supercluster – home of Milky Way – is marked at the center, but is too small to be seen in the image

The word observable does not depend on whether modern technology actually allows detection of radiation from an object in this region. It simply means that it is possible in principle for light or other signals from the object to reach an observer on Earth. In practice, there is much that we cannot see. We can see light only from as far back as when particles were first able to emit photons that were not quickly re-absorbed by other particles. Before then, the universe was filled with a plasma that was opaque to photons.