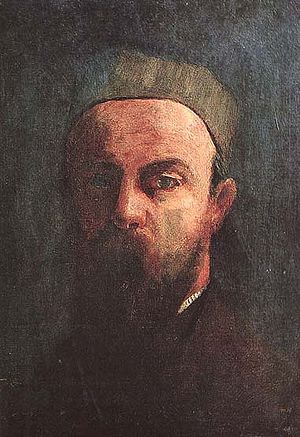 Redon started drawing as a young child, and at the age of 10 he was given a drawing prize at school. At age 15, he began official study in drawing but he later on switched to architecture because his father told him to. His failure to pass the entrance exams at Paris’ École des Beaux-Arts ended any plans for a career as an architect, although he would later study there under Jean-Léon Gerôme.

Back home in his home town of Bordeaux, he took up sculpture, and Rodolphe Bresdin instructed him in etching and lithography. However, his artistic career was halted in 1870 when he joined the army to serve in the Franco-Prussian War.

At the end of the war, he moved to Paris, working almost only in charcoal and lithography. It would not be until 1878 that his work gained any recognition with Guardian Spirit of the Waters, and he published his first album of lithographs, called Dans le Rêve, in 1879. Still, Redon remained unknown until the appearance in 1884 of a cult novel by Joris-Karl Huysmans titled, À rebours (Against Nature). The story featured a decadent aristocrat who collected Redon's drawings.

In the 1890s, he began to use pastel and oils, which featured in most of his works for the rest of his life. In 1899, he exhibited with the Nabis at Durand-Ruel's. In 1903 he was given the Legion of Honor. His popularity increased when a catalogue of etchings and lithographs was published by André Mellerio in 1913 and that same year, he was given the largest single representation at the New York Armory Show.

In 2005 the Museum of Modern Art launched an exhibition called "Beyond The Visible", a comprehensive overview of Redon's work showcasing more than 100 paintings, drawings, prints and books from The Ian Woodner Family Collection. The exhibition ran from October 30, 2005 to January 23, 2006.