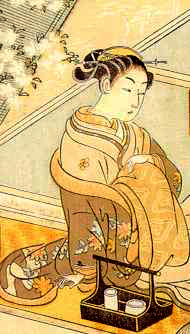 An oiran preparing for a client, ukiyo-e painting by Suzuki Haronubu (1765)

Oiran (花魁?) were courtesans in Japan. The word "oiran" is made of two Japanese words, 花 meaning "flower", and 魁 meaning "first." Oirans disappeared in the 18th century, but the tradition is still remembered.

The oiran appeared in the Edo Period, (1600–1868). Like many things in Japanese culture, the world of courtesans became very complicated. Different kinds of oirans appeared, depending on their beauty, skills in art, education and more. The more important rank of oirans was called tayū (太夫?). Only nobles could be with one. Tayū had many servants, and when they went outside, many servants carried them and followed them, like a procession. They used very rich and expensive clothes and jewelry. Every man who wished to be with an oiran had to follow difficult rituals and etiquette, and only the very rich and noble could.

When the geisha appeared, the era of the oiran ended. Geisha practiced the common entertainments enjoyed by the people of that time. They became very popular, much more than oiran. The last known oiran was in 1761. The few women who still practice the arts of the oiran today (without the sexual aspect) do so to keep the cultural heritage, and not as a profession or occupation.