Geisha (芸者?) or geigi (芸妓?) are traditional female Japanese entertainers. They are skilled at different Japanese arts, like playing classical Japanese music, dancing and poetry.[1] The term "geisha" is made of two Japanese words, 芸 (gei) meaning "art" and 者 (sha) meaning "person who does" or "to be employed in". The most literal translation of geisha to English is "artist". Geisha are very respected and it is hard to become one.

Another common word to call geisha is Geiko (芸子). This word was made in Kyoto, and it is what they are called there. Kyoto is the city where the geisha tradition is older and stronger. Becoming a professional geisha (geiko) in Kyoto usually takes five years of training.

Apprentice geisha are called "maiko" (舞妓). This name is made of the Japanese words 舞 (mai) meaning "dancing" and 妓 (ko) meaning "child". Maiko wear white make-up and kimono of many bright colors. Full geisha wear simpler kimonos, and only use white make-up at special times.

There are also geisha in other cities, but they are different. In Tokyo, becoming a full geisha takes from six months to a year. The Tokyo geisha apprentice is called "han'gyoku" (半玉) "half-jewel", or "o-shaku" (御酌), "one who serves (alcohol)". Tokyo geisha are normally older than Kyoto geiko.[2]

Modern geisha still live in traditional geisha houses called "okiya" ("geisha house") in neighborhoods named "hanamachi" (花街 "flower towns"). However, most older geisha who are successful have their own home. The elegant world that geisha are a part of is called "karyūkai" (花柳界 "the flower and willow world").[3] A famous geisha, Mineko Iwasaki, said this is because "geisha is like a flower, beautiful in her own way, and like a willow tree, gracious, flexible, and strong."[4]

The geisha are considered cultural icons of Japan.

Geisha are more modern than many people think. There were some women who worked as artists before geisha appeared, since the Heian Period (794-1185); but the true geishas appeared much later. In 1589, Toyotomi Hideyoshi authorized the building of a neighborhood in Kyoto, closed from the outside with walls. It was called Shimabara, and it was dedicated to pleasure.[5] This included enjoying arts, drinking, and luxury . Courtesans (called oiran 花魁) worked as expensive s, and attracted rich clients. Many artists also worked at the same houses, to entertain the clients with music, dancing and poetry. For a long time, these artists were men, and they called themselves "geisha" (artists), "hōkan" (jesters) or "taikomochi" (drummers, because they played the taiko, a Japanese drum).[6]

Like many things in Japanese culture, the world of courtesans became very complicated. Every man who wished to be with an oiran had to follow difficult rituals and etiquette, and only the very rich and noble could.[6] For this reason, many tea houses (ochaya) appeared outside Shimabara. However other women, who were called "odoroki" (dancing girls), acted as dancers and musicians. These women soon became very popular. They started calling themselves "geisha", like the male artists who worked at Shimabara. More or less by the year 1700, the female geisha became much more popular than the male ones. A few years later, almost all geisha were women.[7]

The government made laws that geisha to work as s, and only gave them permission to act as entertainers.[8][dead link] One of these laws said that they had to tie their obi (帯 sash) in the back, to make it harder for them to take their kimono off. Their hairstyle, make-up and kimono also had to be simpler than the oirans', because their beauty had to be in their art, not their bodies.[9] Soon, the geisha became so much more popular than the oiran, that by the year 1750 all oiran had disappeared. Other new geisha neighborhoods (hanamachi) were created in Kyoto and other cities.

In the 19th century, the geisha were in better position than common women, but they also had problems in Japanese society. Sometimes, poor people sold their daughters to the hanamachi tea houses. Some rich men, called danna (patrons) paid a lot of money to get personal attention from a geisha. Geisha could not marry anymore, so they could have a danna to pay for her expenses. Other men paid a lot of money to take the new girls' virginity (mizuage).[7] But the reputation and respect for the geisha grew again in the Meiji Restoration, and even more after World War II. Important laws that protect them were created. Young girls could not be sold to the tea houses anymore, and the virginity of young geisha could not be bought. Since then, women only become geisha by their free will.[10] 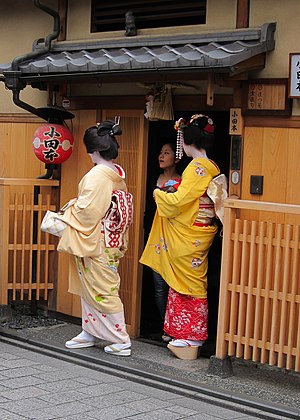 Most of the activity of geisha today is located at the hanamachis of Kyoto (especially the Gion hanamachi) and Tokyo. In modern Japan, they are almost never seen outside of them. In the 1920s there were over 80,000 geisha in Japan, but today there are far fewer. The main reason is the introduction of Western culture. The exact number of geisha today is not known, but is estimated to be from 1,000 to 2,000.[6] Most women who appear as geisha for tourists are in fact actresses dressed as maikos.

Young women who wish to become geisha now usually begin their training after finishing junior high school or even high school or college. Many women begin their careers as adults. Geisha still study traditional musical instruments like the shamisen, shakuhachi (bamboo flute), and drums, as well as traditional songs, Japanese traditional dance, tea ceremony, literature and poetry. By watching other geisha, apprentices also become skilled in the difficult traditions of dressing, make-up, and in dealing with clients.

Geisha are often hired to go to parties and , normally at tea houses or at traditional Japanese restaurants (ryōtei). Their time is measured by the time it takes an incense stick to burn, and is called "senkōdai" (線香代, "incense stick fee") or "gyokudai" (玉代 "jewel fee"). In Kyoto the terms "ohana" (お花）) and "hanadai" (花代), meaning "flower fees", are used instead. The clients hire the service of geisha through the Geisha Union Office (検番 kenban), which takes care of the geisha's schedule and makes her appointments both for entertaining and for training.[11] 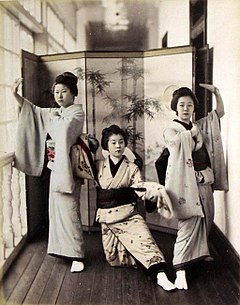 Traditionally, geisha began their training at a very young age. Although some girls were sold to become geisha as children, this was not normal practice in hanamachi with good reputation.[12] Daughters of geisha were often educated as geisha themselves.

The first part of training is called "shikomi". In the past, when girls first arrived at the okiya (tea house), they were put to work as maids, or do everything they were told. The work was difficult, to "make" and "break" the new girls. The most shikomi of the house had to wait late into the night for the senior geisha to return from work, sometimes as late as two or three in the morning. During this stage of training, the shikomi went to classes at the hanamachi's geisha school. In modern times, this stage still exists, but it is not as hard as it was in the past. Now, shikomis become used to the traditions and dress of the "karyūkai" ("flower and willow world").

When the apprentice became skilled in the geisha arts, and passed a final and difficult dance test, she was promoted to the second stage of training: "minarai". Minarai did not do the housework anymore. This stage also exists today, but is much shorter than in the past (only a month). The minarai learn in the field. They go to banquets and dance with the geishas, but they do not participate: they just sit, watch and learn from their onee-san (older sisters). Their kimono are more than even a maiko's, to do the talking for them.

After a short time, the third (and most famous) stage of training begins, called "maiko". Maiko are apprentice geisha, and this stage can last for years. Maiko learn from their senior geisha and follow them around to every she does. The "onee-san/imoto-san" ("older sister/younger sister") relationship is very important. The onee-san teaches her maiko everything about working in the hanamachi. She will teach her the right ways of serving tea, playing the shamisen, and dancing, and everything about the art of Iki (see below). Maikos have to wear heavy white make-up, elaborate hairstyle, and have her lips painted almost all the time. Their kimonos and obi have more vibrant colors and richer embroidery than those of full geisha. Like the minarai, maikos do not charge as much money to go to parties or gatherings as a full geisha.

After a period of only six months (in Tokyo) or five years (in Kyoto), the maiko is promoted to a full geisha and charges full price for her time. Geisha use kimono of less colors and only use make-up for work or dance, because she is more than a maiko, and the simpler style shows her own natural beauty. Geisha remain as such until they retire.[13]

The art of geisha and Iki

Obi. The law said that they had to tie their obi in the back.

Geisha must be very skilled at traditional Japanese music, dance, and poetry, because they use all these arts when they work. The art of make-up, hairstyles, and clothing are very important too.

However, the most important principle of a geisha is called Iki.[14] Iki started in the 18th century as a reply to the extravagant ways of the courtesans (oirans) and those who liked their style. Oirans wore very elaborate clothes, make-up, and jewelry. Geisha preferred to be , and more intelligent. They created iki as a style that gave more importance to conversation and wit. A geisha will flirt, , and joke with men, but always with art and elegance. Japanese clients know that nothing more can be expected. Men enjoy the illusion of that which is never to be.[15] Geisha give more importance to their reputation than s do, and they almost never enter a relationship with a client. Those that do generally act with care usually get married. Normally, when a geisha marries, she retires from the profession. The most important quality of a geisha is her trustworthiness, especially to Japanese clients. Anything that her clients do, or tell her, must remain a secret. Anything said or done at a tea house will remain anonymous.[16]

Becoming a geisha needs much discipline. A geisha believes she must be a work of art in herself. They work every day to improve, in everything they do. A geisha's movements, her way of walking, sitting, and talking are very important. Geisha are geisha all the time, even when they are not working, or at home. An example of this is the old custom of kangeiko ("lessons in the cold"). Until the early 1920s, apprentice geisha used to put their hands in icy water, and then go outside in cold weather to practice playing the shamisen until their fingers bled.[17][18]