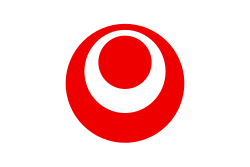 Okinawa Prefecture (沖縄県, Okinawa-ken?, Okinawan: Uchinaa-ken) is traditionally a prefecture in the Kyūshū region of Japan.[1] Okinawa Prefecture is made up of islands which are southwest of the island of Kyushu.[2] Recent government proposals recognize the prefecture as its own region.[3]

The capital city is Naha which is on the island of Okinawa.[4]

Okinawa is a grouping of many islands along the border at the edge of the East China Sea and the Pacific Ocean from Kyūshū to Taiwan. It is the southernmost prefecture in Japan.[2]

Okinawa Prefecture has eleven cities. Okinawan names are in parentheses.

These are the towns and villages in each district.

National Parks are established in about 19% of the total land area of the prefecture.[7]

Naminouegū was the chief Shinto shrine (ichinomiya) of the Ryukyu Islands.[8] In 1890, the shrine was recognized in the system of State Shinto. It is among the ranked, nationally significant shrines or Kanpei-shōsha (官幣小社?) which includes five sanctuaries.[9]